Taking off the training wheels 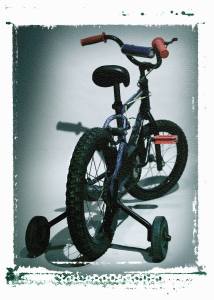 The Restless Writers had their first official meeting last Wednesday night. We started with some tapas and wine, chatting easily about what we were writing and why. Before long, it was time to lay the goodies aside and get into the critique.

We each tried to stick to what is generally referred to as the “shit sandwich”—that is, frame your negative comments with some positive ones so the person getting the critique doesn’t feel like giving up, heading home and drowning her sorrows in a pint of Clorox.

One member shared her completed YA novel, which I have had the pleasure of reading before, along with the query letter she was using to send it out to agents. Another member titillated us with the first chapter of her chick-lit novel.

I chose to share a short story that I had started several years ago but recently resuscitated. My reasons for choosing this particular piece were mostly due to vanity. I wanted to show off my lyrical, whimsical side; and I thought my concept was inventive and a little kooky.

The Restless Writers gave me some valuable feedback. There were sections where the story’s timeline and setting were not clear. They wanted to hear more about what caused a certain key element in the story. And how exactly did the characters get from point A to point B?

But the most unexpected feedback I heard was: “This should totally be a novel.” The other writers were so adamant about it that I started wondering why I hadn’t thought to make it a novel from the start. I laughed it off, saying I was just lazy.

“You say it’s laziness, but it’s really fear.” This comment from a fellow Restless Writer must have struck a nerve, because I have thought of little else for the past few days.

I read in Monday’s Toronto Star that procrastination is being studied as a reaction against the fear of failure. Perhaps my genre of choice—the short story—is my own mechanism for dealing with the fear of failing at writing a novel.

What am I afraid of? In short, I’m afraid of screwing up.

With a short story, you have only so much room to go wrong. If one story doesn’t go as planned, you can just pick up and start again. Easy come, easy go—that was my attitude. The short story was my way of practicing writing before I started anything really serious.

Since I re-embarked on writing, I have told myself that I have to start small. I have to re-train writing muscles that have atrophied from lack of use. I have to practice writing in a safe, small and insignificant forum. I told myself that it was just like riding a bike. I just needed to practice. Take a couple of loops around the cul-de-sac before heading out on a real bike ride.

But you know what? I want to create something really spectacular. I want to invest myself in my writing, put the best of my creativity into a great book that resonates with readers. I want to write something that I would love to read. And although I enjoy reading short stories, when I want to lose myself in a work of fiction, the novel wins every time.

So, that whole fear of failing thing? I’m going to forge right past it. After all, no one wants to read a story that still has training wheels attached.

I offer my thanks to the Restless Writers for telling me to get my head out of my butt and write my novel already! I’m planning to share my outline in time for our next meeting.